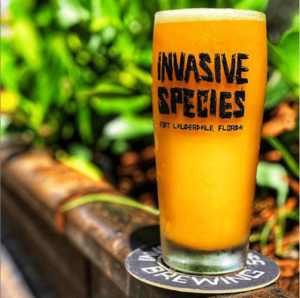 Opening as “Best New Brewery” by the Sun Sentinel and recently being covered by Forbes Magazine as one of the countries best undiscovered breweries, Invasive Species has solidified its place as one of the premier breweries in South Florida.

Invasive Species is owned and operated by the brewers themselves.  Born and raised in South Florida, the taproom is a reflection of those brewers.  It’s a one-of-a-kind museum of natural history meets urban warehouse district – loaded floor to ceiling with all varieties of taxidermy.  It was originally started in partnership with Laser Wolf, a local Fort Lauderdale craft beer bar.

The beers are in a constant succession, with new offerings weekly.  Twenty tap lines feature rotating beers available only at the taproom with no plans for large scale distribution.

The glue binding it together is a great staff of people that demonstrate the knowledge and passion for their craft that sets this place apart from the pack.

The vibe is as original as the beers are unique.  It lets you know you’ve entered the heart of Florida.

Be the first to know when we release limited edition brews.

Yes I Am
No